First, because the Active Directory delegation capabilities are extremely powerful and could lead to highly complex hierarchy which is then hard to check.

Second, because the built-in tools are limited: The permissions are displayed in the properties of each object, the effective permissions for a user on an object can be calculated but the usage is limited in large environment and provide approximated and sometimes inaccurate results (See Microsoft KB 933071). Other alternatives will also be describe in this post.

Active Directory objects, like all other securable objects, have a Security Descriptor which answer to different questions:

An ACE can be of two different kinds:

The ACEs in the DACL are ordered in a specific order, explicit ACEs are placed before inherited ACEs and access-denied ACEs before access-allowed ACEs. The System evaluate the access by comparing Security Identifiers (SID) in the client access token with SIDs in each ACE, one by one from the top down.

The DACL ACEs evaluation stops when the system founds either one of the following matching ACE or:

With this in mind it is easy to figure out that analyzing true effective permissions is more than just extract ACEs.

How can we analyze Active Directory permissions ?

These tables can be dumped in a MongoDB database to be then requested for permissions (and other security settings) analysis in a much more powerful format than excel sheet. Working on a database is also a great benefit in terms of performance when you have to deal with 100000 ACEs or more in Active Directory. Another benefit of dumping Active Directory tables in a database is that you have more than Active Directory permissions, you have all the information stored in the database. With this approach, you can do much more than analyzing Active Directory permissions in terms of security audit. The dumping of the database in MongoDB is the purpose of the BTA Tool (Note: You can even dump the datatable on a live environment in a text file with the dbdump feature of ldp)

Let’s have a look at a simple user account named bj7 and how it looks like in the Data Table: 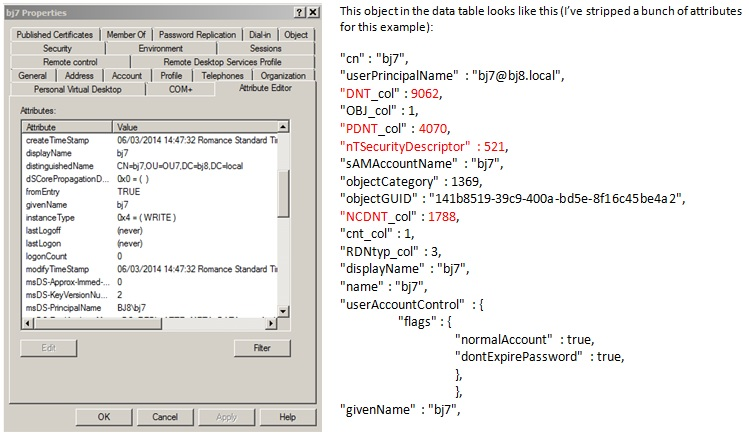 Once decoded, you can display the same information in the SD Table than in the Windows Console. Here is an example with my user bj7 with the following permissions entries: 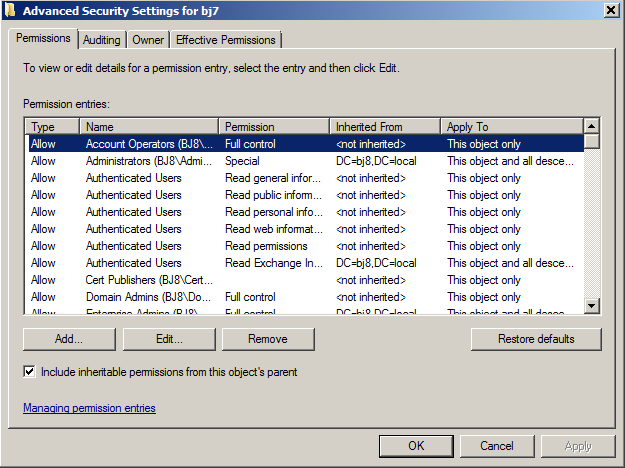 The ACL in the SD Table is the same as the one extracted with ldp.exe in the live environment, example with these two ACEs: 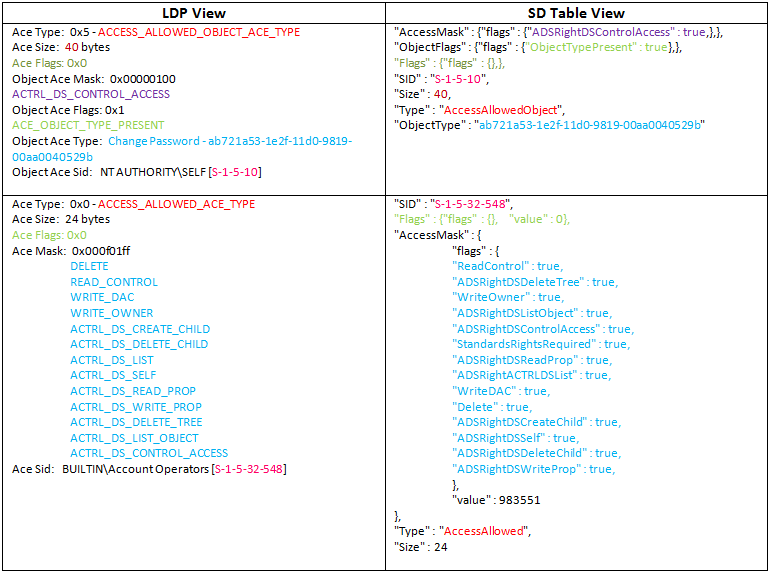 The second step is to analyze the extracted ACEs to get the effective permissions:
In the first option, using Checkdsacls to dump permissions in an Excel File, you need to create your own script based on this particular input format.

With the second option, working with the SD Table, once we have all Security Descriptors in our mongodb table, decoded the valuable information, we can then easily elaborate simple and complex scripts based on this easy-to-use data format. As an example, a script can process the entire ACL on an object and provide the effective permission of each trustee: get all the ACEs for the trustee or a group for which the trustee is a member (can depend on the type and starting location of the client access), and simulate resultant ACEs processing using the Windows Access Control logic described earlier. Valuable reports can then be built from database data extraction, for example:

In the next post, I will describe one of the various possible extractions in the SD Table, the processing to find effective permissions, and the valuable information it gives to the Active Directory administrator.