This vulnerability report is intended to study two vulnerabilities in Cybereason EDR (Endpoint Detection & Response) that allow a non-privileged user to cause a Denial of Service on two sensitive executables:

A disruption of both minionhost.exe and ExecutionPreventionSvc.exe involves remote monitoring, that is a station which centralises all events that occur inside an enterprise network, of being not aware of the current threats on the endpoint station. Without these logs, an operator could not perform actions to solve ongoing issues.

Throughout this vulnerability research, the in-depth analysis does not focus on the software architecture, binaries/services roles and functionalities offered. Therefore, some considerations will certainly be approximate. Our main goal is to identify weaknesses from an attacker point of view to contribute in securing this relevant product and as a result, the end customers.

Cybereason Products [1] are designed to protect end-user workstations from complex cyber-attacks. One of them acts as an Endpoint Detection & Response (EDR) which provides visibility to critical information such as: process actions, file access information, network events, configuration changes on the endpoints, and so on. The version tested is designed to be non-invasive, and so is only based in the user-space of the operating system. However, a configuration using an additional kernel component is also available to bring in more self-defence mechanisms.

Finally, we would like to thank Cybereason for our mutual exchanges and their willingness to fix these vulnerabilities in the best possible manner.

This analysis is based on an older version of a Cybereason product but all recent versions are also affected. More precisely, this study has been achieved on the 19.1.20.0 version:

Please see Figure 1 below, a screenshot that provides a version of the Cybereason product: 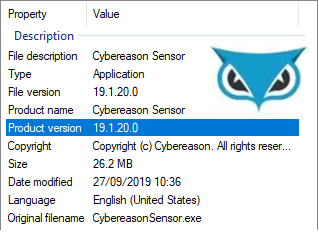 Figure 1: Version of the Cybereason product

The first vulnerability is located in the minionhost.exe whereas the second is located in a DLL named SAScanner.dll which is loaded by the ExecutionPreventionSvc.exe service.

We will see why both the minionhost.exe and the ExecutionPreventionSvc.exe are sensitive processes. We already know they run with NT AUTHORIY\SYSTEM rights. However, being aware of their rules allows us to understand what is impacted if these processes are unavailable.

Before going further, this product relies mainly on the use of an open source library for inter-process communication. That is named ZeroMQ (ØMQ) [2].

This library extends the standard socket interfaces with features traditionally provided by specialised messaging products. In particular, ZeroMQ sockets provide an abstraction of:

The way these sockets work depends on the type of socket chosen. In addition, the flow of messages being sent depends on the chosen patterns, of which there are four:

First, minionhost.exe is launched by the ActiveConsole.exe process, which is itself started by the PylumLoader.exe service. The latter is the Active Probe parent process. The minionhost.exe seems responsible to collect and deliver messages such as logs from and to other Cybereason executables. In fact, it acts as a publish-subscribe proxy by using the ZeroMQ Publish/Subscribe pattern. This one allows you to have multiple ZeroMQ consumers connecting to multiple ZeroMQ producers.

Please see Figure 2 below, a scheme which illustrates the publish-subscribe proxy: 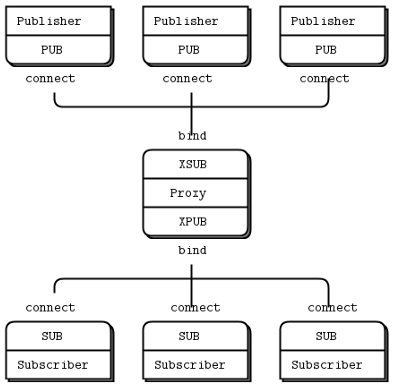 At this point, crashing the minionhost.exe process means that the endpoint station will not be able to:

One of the Cybereason’ processes acts as a consumer process and is responsible of delivering logs to the monitoring station over the network. If it can no longer receive input messages, it will not throw events of current threats occurring on the endpoint station. Therefore, an operator could not remotely perform actions to solve suspicious or malicious behaviour. As you can understand, this makes the minionhost.exe binary a good candidate to turn off.

In order to act as a Publish/Subscribe proxy, the minionhost.exe listens on three TCP ports:

The zmq_proxy_steerable() [3] function allows you to start the built-in ØMQ proxy in the current application thread. Its prototype is defined as follows:

If the third argument, named control, is not NULL, the proxy supports control flow. That is how it is implemented in the minionhost.exe code.

Later, in the Proof of Concept chapter, we will discuss a way of leading to a crash of minionhost.exe due to an improper exception handling over the control flow socket.

The vulnerability occurs by sending a ZeroMQ data message of 256 bytes to the control flow socket (10557). This message is filled with a 0x41 hexadecimal value and will be then managed by the libzmq.dll module. One field of the data message is seen as a control flow command such as:

In this context, the “A” (0x41) string is an unknown control flow command and could not be handled. So, an exception is thrown, but unfortunately not caught by the upper layer, that is part of the minionhost.exe code. This programming mistake leads to a crash of minionhost.exe.

Please see Figure 3 below, a screenshot of disassembling code which raises this exception: 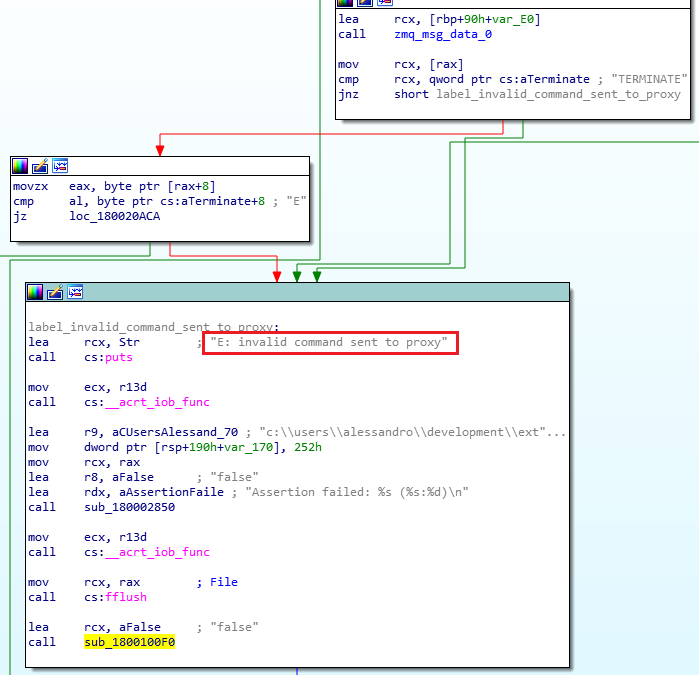 As ZeroMQ is an open source library, we can retrieve the above code in C language.

Please see Figure 4 below, an extract of zmq::proxy [4] function which holds on the code involved: 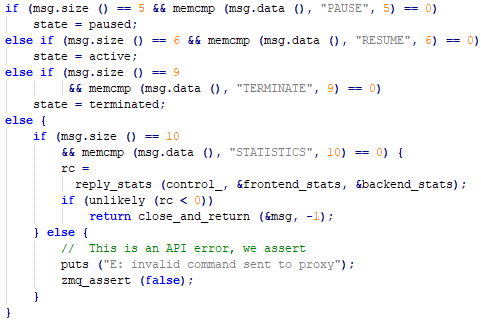 From the disassembly code in Figure 4 and the C code source in Figure 5, we retrieve the string “E: invalid command sent to proxy”. In fact, an exception is thrown from the zmq_assert() function. Therefore, a call of the zmq::proxy function should be enclosed with a “try…catch” code.

Please see Figure 5 below, the call stack which provides more details on the execution flow:

This vulnerability is located into a DLL named SAScanner.dll which is loaded by the ExecutionPreventionSvc.exe service.

A brief description of these two components is the following:

With this knowledge, stopping the ExecutionPreventionSvc.exe process makes the endpoint station not protected against cyber-threats. Malicious or suspicious executables will no longer be detected and no more logs are thrown to a monitoring or supervision station. That is why this binary is also a good candidate to turn off.

Based on this, the easiest way to communicate with the ExecutionPreventionSvc.exe service is to deal with this library to establish a TCP communication from our executable. Then, we can attempt to send malformed packets to get unexpected behaviours.

Later, in the Proof of Concept chapter, we will discuss a way leading to a crash of ExecutionPreventionSvc.exe due to an improper exception handling.

The vulnerability occurs by sending a ZeroMQ data message of 256 bytes to the TCP port 40270. This message is filled with a 0x41 hexadecimal value and will then be managed by the SAScanner.dll module. One field of the data message is seen as a “command” type. Here the “0x41” value is an unknown command and could not be handled. So, an exception is thrown, but unfortunately not caught by the upper layer. This programming mistake results in a crash of ExecutionPreventionSvc.exe, that is a Denial of Service.

Please see Figure 6 below, a screenshot of disassembling code which raises this exception:

From the above Figure, you can see the _CxxThrowException() which raises an exception as soon as a command is unknown. Even if this call seems coming from the SAScanner.dll, one assumption is we are faced with an inline function being part of the ZeroMQ library. This is why the crash of ExecutionPreventionSvc.exe occurs just after this call.

Please see Figure 7 below, the call stack which provides more details on the execution flow:

This proof of concept is compiled as a Windows executable which relies on the ZeroMQ library to exchange data on the TCP port 10557. The following function calls are needed:

These functions will be loaded dynamically through a LoadLibrary() call and several GetProcAddress() calls.

Note that as soon as these services are not responding for a short time, they are started again. A watchdog mechanism is set up. However, some experimentations unveil that the service will be launched up to 5 times. So, you just need to execute several times this PoC to definitively kill both the minionhost.exe and the ExecutionPreventionSvc.exe.

Please see Figure 8 below, the main function in C language which triggers the vulnerability in minionhost.exe:

This PoC targets the vulnerability on the following environment:

Please see Figure 9 below, a screenshot which highlights the minionhost.exe PID before launching the PoC.

The PID is currently 5500. After executing our PoC, the service will be crashed. As it would be started again up to 5 times, the PID will not be the same.

Please see Figure 10 below, a screenshot when executing the PoC:

Please see Figure 11 below, a screenshot which illustrates that the service is restarted:

The PID is now 5992 but the PID of the parent process is unchanged.

These two vulnerabilities CVE-2020-26562 and CVE-2020-26871 target respectively two critical components of the Cybereason Product, that is the minionhost executable as part of ActiveProbe Service and the Execution Prevention Service. If one of these services is unavailable, the endpoint station can no longer send event logs to the monitoring station. Consequently, an operator will not be aware of current threats occurring on the endpoint and no actions could be remotely performed to solve suspicious or malicious behaviours.

One plain recommendation to avoid such Denial of Services will be to always catch exceptions thrown from the ZeroMQ library.

Cybereason reacted quickly both to confirm both vulnerabilities and fixed these issues in order to protect as much as possible the end customer.

May 24th, 2020 Vulnerabilities are fixed