A Sysmon bug into the abbreviated versions of registry root names

Sysmon is a widely known and powerful tool that could be used as an EDR. Through this short analysis, a programming mistake has been identified when Sysmon converts the registry root key names to their abbreviations. Even if this bug does not seem to lead to a vulnerability, it is interesting to describe it. 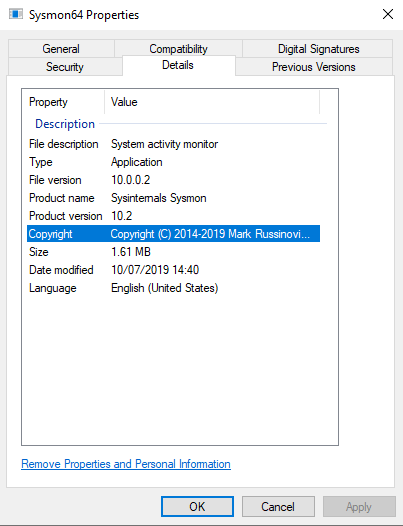 Description of the bug

Sysmon uses the Event ID 12 (RegistryEvent) to log the creation/deletion of registry key and value. One way is to use abbreviated versions of Registry root key names, with the following mappings:

A programming mistake occurs when “Sysmon” converts the registry root key names to their abbreviations.

The function that converts the registry root key name takes two arguments as below: 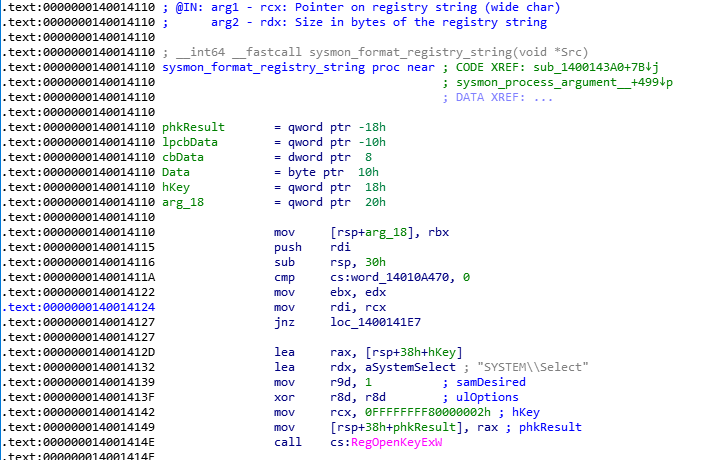 What happens in practice is that many registry key names are unnecessarily compared. We would have thought that a read out of bound occurs but this  is not the case. Actually, the comparison ends if a terminating null character is reached, in either string before the numbers of characters are compared.

Below, what happens when “Sysmon “attempts to convert a registry root key name to HKCC.

We can see these comparisons in the following screenshot: 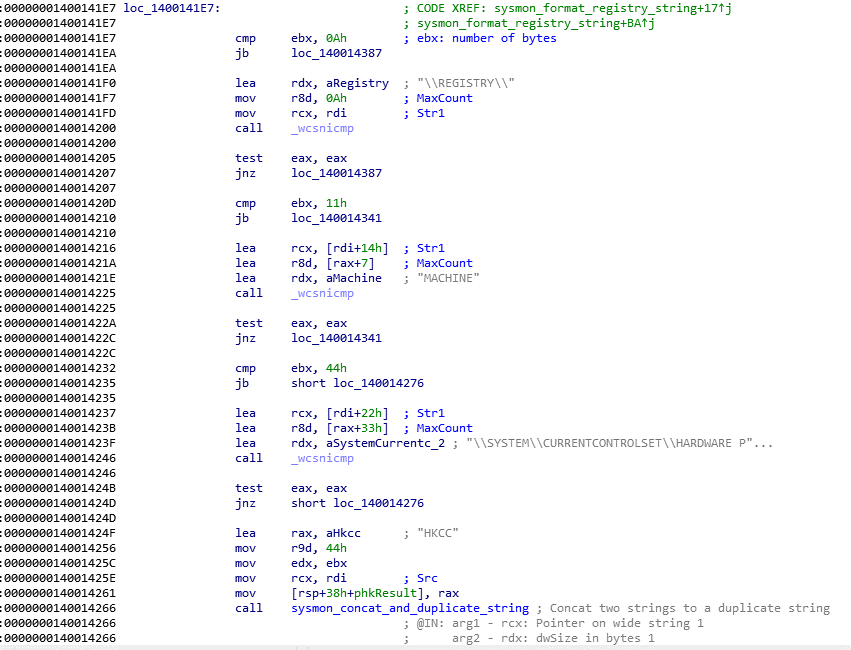 In order to illustrate this behaviour, we put the following breakpoint to display the size and the string to compare:

This breakpoint is set at the 0x140014246 address, corresponding to the location where a “_wcsnicmp” occurs with the string “\\SYSTEM\\CURRENTCONTROLSET\\HARDWARE P”.

Now, if we attempt to create and modify the “HKEY_LOCAL_MACHINE\SYSTEM\12345678” registry key name, we obtain this debug trace:

We notice right away that this input registry key name should not be compared with the “\REGISTRY\MACHINE\SYSTEM\CURRENTCONTROLSET\HARDWARE PROFILES\CURRENT” string. Indeed, the previous checks on the size should have prevented this comparison. However, due to the confusion, it is not the case.

Oddly, despite the confusion between a size in characters and in bytes, the size of this registry key seems to be 0x42 bytes and not 0x44 as my breakpoint shows us. We could assume that the null character is also taken into account.

In conclusion, Sysmon is a well-designed tool, involving few software components. An executable service and a minimalist driver are needed for the effective operation. Then, we quickly noticed that a security development has been taken into account. Obviously, this is not surprising. Nevertheless, any software has bugs, more or less critical for the product and the end user security. Microsoft has rightly determined that this submission does not meet the bar for security servicing. Actually, exploitation does not seem possible!  Only a loss of performance occurs. Finally, a bug fix could emerge in the next days.