The finals of the first cyber security challenge organised by the ‘Pôle d’Excellence Cyber’ cluster in partnership with Airbus Defence and Space and Thales was held on 24 November in Rennes. After more than five hours of technical tests, three teams – each composed of three students – were singled out from the sixteen teams that had made it to the finals. The three winning teams were best at thwarting cyber attacks from an ‘international organisation’, keeping the loss of critical infrastructure in the field of energy (fossil, nuclear or gas) under their supervision to a minimum. The nine successful participants were each awarded technology prizes (computers, smartphones, smartwatches, etc.) and places on training courses at Airbus Defence and Space or Thales.
This first challenge aimed to showcase the variety of professions in cybersecurity, a high-growth sector (+ 10% a year on average) constantly on the lookout for specialist profiles such as system architects, security and risk-analysis engineers or pen-testers. The initiative was a real success among students, with more than 400 registrations received at the online shortlisting phase. It is therefore to be repeated. 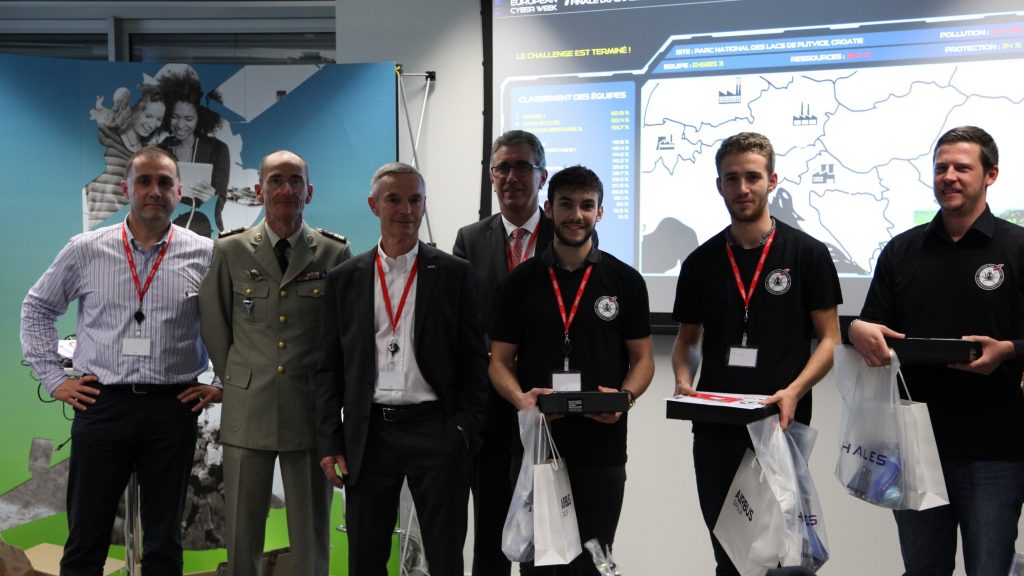 The winners of the first cybersecurity challenge organised by the ‘Pôle d’excellence cyber’ cluster in partnership with Airbus Defence and Space and Thales : Patrick Erard (Pôle d’Excellence Cyber), a French Army Colonel, Martial Imberti (Airbus Defence and Space), Philippe Leroy (Thales), Jordan Coudé, Adrien Blachet and Guillaume Francqueville (ENSIBS- Ecole Nationale Supérieure d’Ingénieurs de Bretagne-Sud)
For further information:
• European Cyber Week: https://european-cyber-week.eu/
• Challenge website: https://challenge-ecw.fr/
About ‘Pôle d’Excellence Cyber’
Set up under the aegis of the French Ministry of Defence and with the support of the Regional Council of Brittany, the ‘Pôle d’Excellence Cyber’ cluster operates nationwide and aims to extend its scope internationally. The ‘Pôle d’Excellence Cyber’ is focused on 3 areas: basic & continuous training and higher education; research and development of the industrial sector.
contact@pole-excellence-cyber.org
About Airbus Defence and Space
Airbus Defence and Space, a division of Airbus Group, is Europe’s number one defence and space enterprise and the second largest space business worldwide. Its activities include space, military aircraft and related systems and services. It employs more than 38,000 people and in 2015 generated revenues of over 13 billion Euros.
CyberSecurity, a business cluster within Airbus Defence and Space, provides companies, critical national infrastructures and government and defence organisations with reliable, high-performance products and services to detect, analyse and counter increasingly sophisticated cyber attacks.
About Thales
Thales is a global technology leader for the Aerospace, Transport, Defence and Security markets. With 62,000 employees in 56 countries, Thales reported sales of €14 billion in 2015. With over 25,000 engineers and researchers, Thales has a unique capability to design and deploy equipment, systems and services to meet the most complex security requirements. Its exceptional international footprint allows it to work closely with its customers all over the world.