In our previous blog post about the PlugX RAT, we dealt with the original version, and recapped some internal features. Back in mid 2013, we started to see a new version of the RAT in the wild, with enough differences with the previous one to be considered as a new major version. We thus called it internally “PlugX v2”. Some posts from SecureList and FireEye were dealing with this new version, but none of them gave a full analysis.

In this post, we will detail the main differences and new features introduced by this version.

Some samples of this new version, as for the previous release, are debug releases. We could therefore identify the following debug strings:

We could link all these new PlugX versions to the following internal version numbers:

The only sample with version 20130524 is the one with the scontroller(2.0) debug string. We’ll see later that this is an intermediate version between the most evolved “PlugX v1” samples and the new “PlugX v2” ones. The compilation dates range from July 2013 to December 2013.

The new PlugX uses a new, custom, cipher algorithm. While the previous one was a slightly modified version of the one used in Destory, this one has nothing in common with them: 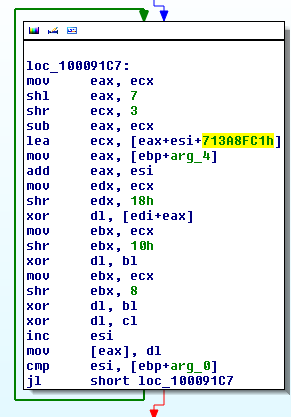 Here is the basic implementation in Python:

This algorithm is used for configuration encryption, network communications encryption as well as for strings encryption, which is a new feature to slow down reverse engineering.

Starting from scontroller(2.0) version, the ICMP protocol has been added as a method to join the C&C. The data is transmitted as a payload of Echo reply (ICMP Type 0) packets.

The HTTP protocol has also evolved. Data is transmitted in a POST request matching the following pattern:

where the %p are random hexadecimal dwords. The following quadruples of headers are used in the request:

The latest version, identified as scontroller(4.0), uses a new HTTP protocol. The request is no longer a POST but a GET, and data is transmitted base64 encoded in a “Cookie” header.

Once the base64 is decoded, we have a ciphered buffer which encryption key is the first dword, and ciphered data is the remaining.

This same sample also has a brand new module, XSoDNS.cpp, allowing the RAT to contact its C&C over DNS. The data is also base64 encoded, and sent as a subdomain of the C&C in the DNS segment (C&C has been faked as “133.133.133.133” in the following screenshot):

This module parses the prefs.js file to grab information about the configured proxy servers.

The new version can inject itself in up to 4 different processes. The full path of the processes are specified in the configuration.

The RAT can be configured to take screen captures at regular intervals, and store them in a local folder, for later retrieval. The configuration parameters are:

The previously unused strings are now part of new features, and a third one has been added:

Harlan Carvey regretted that our previous post about PlugX did not give more information for IR investigators to identify a PlugX infection, especially about the configuration parsing.

We thus decided to release our Volatility plugin to identify and parse PlugX configuration in a memory dump. The plugin works for all PlugX variants we identified so far, with various configuration lengths.

The plugin can be found on our bitbucket repository. Feel free to give us your feedback and/or report any bug!